Form 12BB is a single entity that employees could use to declare their investment and claim tax deductions under HRA (House rent allowance), LTA (Leave travel allowance), Section 80, and interest paid on home loans under Section 24 of Income Tax Act. It is to submit at the beginning of the new financial year or at the time of joining a company any time during the year. Documentary evidence is needed to be provided at the end of the financial year. TDS (tax deducted at source) will be deducted by the employer on the basis of the declaration made in form 12BB from the monthly salary of the employee.

The first part of the form consists of basic information about the employee i.e. Name, Address, PAN (Permanent Account Number) and the financial year.

House rent allowance is exempt under section 10(13A) of the Income Tax Act. In this part of the Form, 12BB employees can claim HRA deductions. For claiming deductions under this section employee has to provide documentary evidence i.e. Rent receipts. He also has to mention his landlord’s Name and address along with the Rent amount paid to the landlord. Landlord’s PAN card number is also to be mentioned if rent paid during the previous year exceeds Rs. 1 lakh. 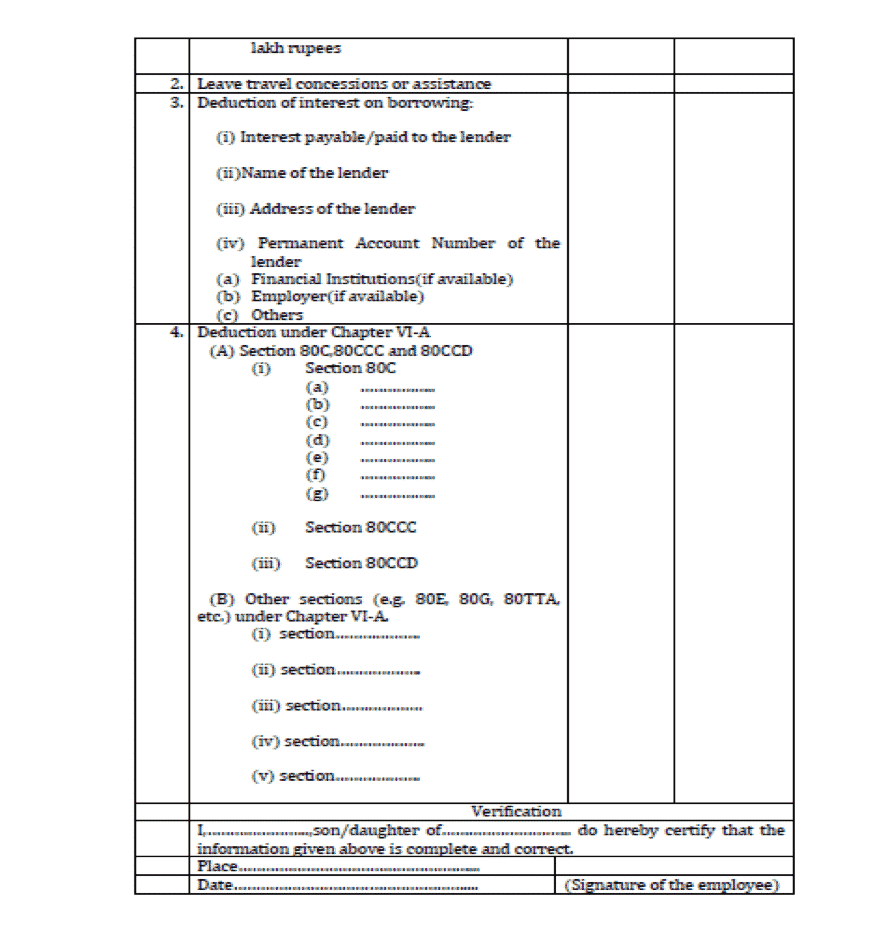 As per section 10(5) of the Income tax act, Leave travel allowance is exempt. The employee has to submit details of the amount spent on travelling and provide evidence of expenses made towards the travel. Earlier it was not mandatory to provide proof of all travel expenses but the new rule makes it mandatory for providing the evidence in form of receipts for claiming the deduction.

Deduction of Interest on borrowing

As per Section 24 of the Income tax act, interest paid for your home loan is tax deductible. In past, if any employee seeks a tax deduction for interest paid for his home loan, he had to submit an interest certificate from the concerned bank. But now, he not only has to submit the interest certificate along with Form 12BB to claim tax deductions under section 24. In Form 12BB he needs to mention the details like interest amount paid to the lender, name and address of the lender including bank or non-banking financial company (NBFC) and PAN Number of the lender.

All tax deductions under 80C, Section 80CCC and Section 80CCD as well as Other sections like 80E, 80G and 80TTA come under Chapter VI-A of the income tax act. To claim deductions, fill up Form 12BB and provide details and proof of the investments and expenditures incurred related to the relevant section.