The income tax department wants to reduce the manual work regarding e-filing and to reduce the tax evasion. As per the notification issued by the IT department, linking of Aadhaar Card with the PAN is compulsory for every assessee.

Let’s have a look on the process of linking Aadhaar card with PAN in this article.

#1. Without registering or logging in to the E-filing Account.

Step 1: Visit to the official e-filing website at https://eportal.incometax.gov.in/iec/foservices/#/pre-login/bl-link-aadhaar and fill all the columns as given in the image like PAN, Aadhaar number, name and mobile number. 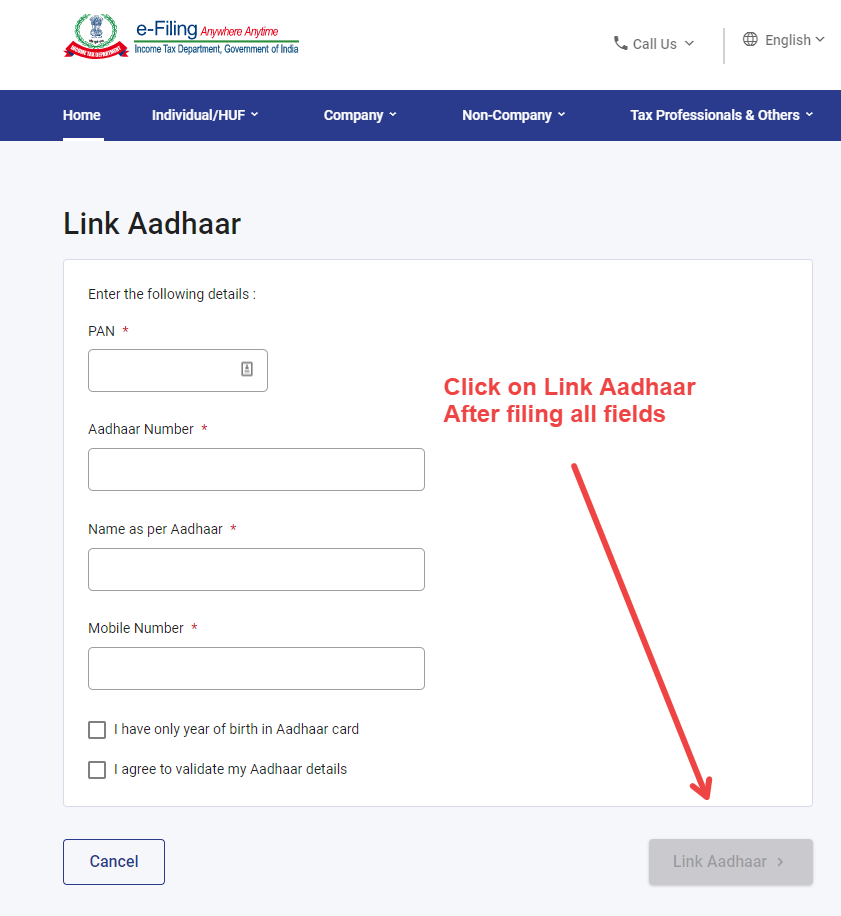 Step 2: After entering all the information click on checkbox as required. Now, click on Link Aadhaar. That’s it!

Note: If there is any mismatch in the Aadhaar name provided, it could be verified through the Aadhaar OTP. The details of PAN and Aadhaar Card such as date of birth, gender should be same for the successful verification.

In case if the name in the Aadhaar card and the PAN are different, the process of linking will fail and the person has to get his name change in the Aadhaar Card or in PAN.

Aadhaar Card can also be linked to PAN through SMS. The IT department wants to encourage the person to link Aadhaar with PAN, so to ease the process linking through SMS is also possible. SMS need to send either on 567678 or 56161.

Send SMS to these numbers from registered mobile number in given format:

The main motive of the government behind the linking of both the numbers is:

You should also read the following articles regarding PAN: –

How to link Aadhaar with PAN?

If your Aadhaar number isn’t yet linked with PAN then every time you login on e-filing portal you, you shall be shown a popup message asking you to link Aadhaar with PAN. Use the link given in the pop-up window to link the Aadhaar with PAN.

Alternatively, you can also follow the below steps to link Aadhaar with PAN:

What are the different modes to link Aadhaar with PAN?

How can I link my Aadhaar number with PAN if there is minor mismatch in my name appearing in Aadhaar and PAN?

Earlier, Income-tax Dept. was allowing linking of Aadhaar Number with PAN if there was minor mismatch in the name appearing in PAN compared to the name appearing in Aadhaar Card. Identity of taxpayers were verified by sending One Time Password (OTP) to mobile number registered with UIDAI.

However, with effect from 01-12-2017 UIDAI has discontinued the practice of verifying the user’s identity with OTP. Therefore, Aadhaar number cannot be linked with PAN if there is any mismatch in the name entry in the records of Aadhaar and PAN. Taxpayers are required to rectify either of the documents, PAN or Aadhaar, so as to complete the process of linking these two records.

Why am I not able to link my Aadhaar with PAN, though my name as per Aadhaar and PAN is same?

There are certain reasons due to which a taxpayer might not be able to link his Aadhaar number with his PAN. Some of the reasons are:

Whether my PAN will be treated as invalid if I do not link my Aadhaar number with PAN?

As per proviso to Sec 139AA(2), in case assessee fails to intimate the Aadhaar Number, the PAN allotted to the person shall be treated as invalid and the other provisions of this Act shall apply, as if the person had not been allotted PAN.

However, in case of Binoy Viswam v. Union of India the Supreme Court has partially stayed the operation of Proviso to Section 139AA(2). It held that if the assessee does not hold the Aadhaar number then PAN should not be considered invalid. However, if assessee is holding Aadhaar number he must intimate it to the Department.

Your PAN will be treated as invalid if you do not link it with Aadhaar number as the Apex Court has given relief in those cases where taxpayers did not possess Aadhaar number.

As per proviso to Sec 139AA(2), in case assessee fails to intimate the Aadhaar Number, the PAN allotted to the person shall be treated as invalid and the other provisions of this Act shall apply, as if the person had not been allotted PAN.

In the case of Binoy Viswam v. Union of India the Supreme Court has partially stayed the operation of Proviso to Section 139AA(2). It held that if the assessee does not have the Aadhaar number then PAN should not be considered as invalid.

I cannot get my Aadhaar number by the end of due date of filing Income-tax Return. How can I file ITR without linking Aadhaar with PAN?

E-filing website doesn’t allow filing of ITR without linking Aadhaar number with PAN. However, recently, the Kerala and Gujarat High Courts in the cases of Prasanth Sugathan v. UOI and Bandish Saurabh Soparkar v. UOI respectively allowed taxpayers to file their returns manually without furnishing the Aadhaar number or enrollment ID of Aadhaar application form. The Courts held that taxpayers who do not have Aadhaar have to be allowed to file their returns before department in hard copy for relevant year as an interim measure. However, it would not be obligatory for department to process such returns and Dept. may demand the Aadhaar number from the taxpayers while processing such returns.

Therefore, it is suggested that you should file the ITR manually by visiting jurisdictional income-tax office by relying on the above judgement. A covering letter should also be attached with the ITR mentioning that the taxpayer has opted to file the return manually relying on the aforesaid High Court Cases. You are also required to mention the reason why Aadhaar number couldn’t be obtained before the end of due date of filing of ITR.

However, you are required to link their Aadhaar number with PAN as and when available so as to enable income-tax dept. to process their ITRs filed.

1 thought on “How to link Aadhaar Card with PAN Online?”